Today is Friday and it’s been a somewhat chilly and murky and windy day. It’s also been the last day of the popular dutch book-sale in the CoalMarket here in downtown Copenhagen. Like I told in my last post the friendly Vangsgaard booksellers have had their lease cancelled beginning Jan.1.

Of course I had to be there and loaf around a bit while trying to get a chance to browse the still well stocked shelves among the other book addicts.

The price today is 5 Kr. (75 cents) and I would like to present some of my finds.

But firstly let’s again take a quick look at a few of my recent tweets (indexed with an asteriks, my comments with an arrow):

*Top Chinese Banker Warns Against Buying Property “Because There’s No More Money To Be Made”
https://www.zerohedge.com/news/2018-12-25/top-chinese-banker-warns-against-buying-property-because-theres-no-more-money-be

*The speed of light is 299,792,458 metres per second and the geographic co-ordinates for the Great Pyramid are 29.9792458°N, Dailystar co uk reports
https://www.express.co.uk/news/weird/940347/Time-travel-speed-of-light-prof-aliens-built-pyramids-UFO

>I have no idea if this is accurate. If it is true it seems interesting.

*Tonite had clairvoyant vision of being burglarized in #NewYearsEve by Mozzard hitsquad. The plan being that hardly anyone will notice kicked-in door, muffled gunshot, general racket in cacophony of exploding #fireworks. Mozzards are real clever, do gods work and can walk on water!

>Yes, that’s right. I am in fact occasionally clairvoyant (mostly) while sleeping. And sadly the TPTB hates my guts, and not least for this very reason.

Hence it’s a priority for the TPTB to have me ‘eliminated’ which, hovever, – and perhaps mostly on account of my modest clairvoyance gift? – has proven itself an elusive task.

But a New Years Eve is ofcourse a wonderful chance to ‘get even’ with a rather annoying critic.

‘But this doesn’t happen in a democracy like our Danish one’ – you protest?

But you have to grow up, dear Danish fellow citizen. Dont be clueless and naive. I can assure you, that our SecretService/SecretPolice (‘P.E.T’) does what their sister agencies do everywhere in the world: They increasingly operate outside the law, not inside but outside the law!

It’s a given, really, because everywhere with no oversight shabby characters feel irresistibly attracted and congregate! It’s simply one of the laws of human society and (in)human character!

And yes, P.E.T IS NOW IS ALSO A SECRET POLICE! The former director of the (then) danish SecretService (P.E.T), the honourable Ole Stig Andersen warned strongly against this development in an essay in leading Copenhagen Daily Politiken from 17. December 2005! (link 1)

Now to the recent G.20 conference:

*In early a.m. of Wednesday Nov.28.2018 had vision of US-President donning his new, green Chinese generals uniform. The Uniform was however in Russian Style. Thats why I tweeted that same wednesday that Xi and US are going to embrace in #G20 and split up #Russia.
THE GUSSIAN GOLD (A Satire)

*(28.Nov.2018) In early a.m. there were rumours in the ether that US & Xi are going to embrace at G20. The split: US to have Europe to Urals, Xi to have Siberia to Urals and IL gets MiddleEast?

>The above two tweets seem to have made quite an impact. You can follow a bit of the resulting panic reaction here:

*One Snub Too Many: Kremlin Sours On Trump As “Patience Coming To An End”
“We can do ‘give and take’ but not ‘give and give’.”
https://www.zerohedge.com/news/2018-12-06/one-snub-too-many-kremlin-sours-trump-patience-coming-end

*Trump told Erdogan in the Dec. 14 call, “OK, it’s all yours. We are done.”
Turkey Says US Agreed To Vacate Syrian Kurdish Enclave As Ground Attack Imminent
https://www.zerohedge.com/news/2018-12-25/turkey-says-us-agreed-vacate-syrian-kurdish-enclave-ground-attack-imminent

*(The Race to Obfuscate: Meng Wanzhou The Red Herring?)
What does NOT make sense is that the arrest happened on Saturday and markets did not find out about it until Wednesday night.
This is where what had to be a massive conspiracy of silence begins to raise some interesting questions.
https://www.zerohedge.com/news/2018-12-12/larry-lindsey-something-about-huawei-cfo-arrest-doesnt-make-sense

*And then? Come G20, ‘nothing’. Trump stalks the edges of G20 looking tense and defensive. He was no alpha-male, dominating these events. He looked crocked. It was all a bit of a dud, really
https://www.zerohedge.com/news/2018-12-10/what-didnt-happen-g20-far-more-important-what-did

*The Presidents of two pre-eminent military and nuclear powers, who sit astride major geo-political faultlines, and who need to talk, circled each other, closed-faced, and without stretching out hands – they could not find even, the subterfuge for sitting together.
https://www.zerohedge.com/news/2018-12-10/what-didnt-happen-g20-far-more-important-what-did

*Jatras concludes, more in sorrow than in anger, “it would be only a small exaggeration to say that with respect to foreign and security policy, Trump is now a mere figurehead of the permanent state. Even if Trump and Putin do happen to meet again, what can the latter expect the former to say that would make any difference?”.
https://www.zerohedge.com/news/2018-12-10/what-didnt-happen-g20-far-more-important-what-did

>Also the former insider, gen. Wesley Clark, is obviously confused. He would be, ofcourse, because he haven’t had a chance to read my blog (unlike a few other top players); hence he simply don’t know the lay out:

*Ex-NATO Commander Wesley Clark To CNN: Did Erdogan Blackmail Trump?
“Was there a payoff or something? What was it? Why would a guy make a decision like this?”
https://www.zerohedge.com/news/2018-12-24/ex-nato-commander-wesley-clark-cnn-did-erdogan-blackmail-trump

>The two danish heroes, Niels Ebbesen and Vitus Bering are most likely virtuelly unknown to any and all modern Danes? Even our 16-volume Biographical Dictionary insist the family relationship of Niels Ebbesen is absolutely unknown. Which may reasonably be stamped as carelessness or even, perhaps, utter incompetence, as it reasonably may be regarded to have been proved beyond reasonable doubt more than a century ago? 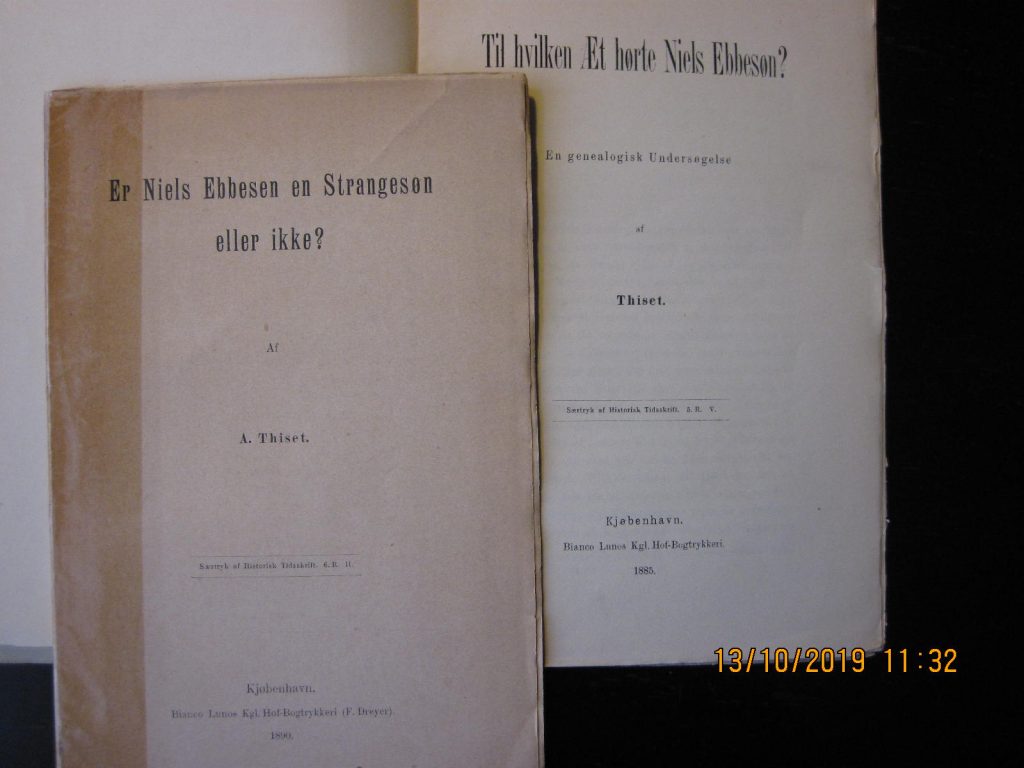 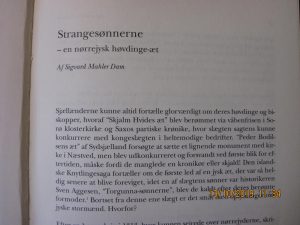 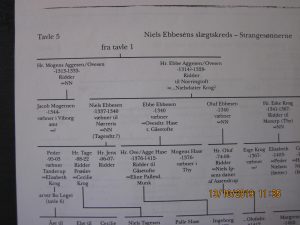 The article by Sigvard Mahler Dam is from Personalhistorisk Tidsskrift 1993:1.

But now back to the beginning – the final sale in the CoalMarket. Here are 8 titles – at 75 cents for each volume:

This is obviously a lucky strike for anyone interested in french literature and thinking. Imagine – $3 for the set!

Of course the binding is definitely not pretty, but it’s nevertheless fully intact, just a bit shabby. But all volumes are real nice inside, making it a pleasure to use them.

Major historical works can be quite boring if they are mere recitals of the accepted, politically correct views of their time.

But I’m sure Mr. Carlyle has his own views to propound and thank you very much for that. Of course I feel this is also almost a steal for the princely price total of $4,50!

Some of the chapters:

This seems to be not only a curious but also a uncommon little book. At least I have not yet found it for sale anywhere on the web.

From the foreword I quote:

I don’t know Mary Baker-Eddy, but ofcourse I know the names of Mesmer (the man that mesmerizes you) and Freud (likewise?).

I’m looking forward to learn how this master author treats of the three pioneers.

A well known work by the internationally renowned danish linguist.

‘If with regard to the Scandinavian invasion historical documents were so scarce that the linguistic evidence drawn from the number and character of the loan-words was a very important supplement to our historical knowledge of the circumstances, the same cannot be said of the Norman Conquest.

‘The Normans, much more than the Danes, were felt as an alien race; their occupation of the country attracted much more notice and lasted much longer; they became the ruling class and as such were much more spoken of in contemporary literature and in historical records than the comparatively obscure Scandinavian element; and finally, they represented a higher culture ((perhaps mr. Jespersen meant ‘civilization’?)) than the natives and had a literature of their own, in which numerous direct statements and indirect hints tell us about their doings and their relations with the native population.’ (Link 2)

Anatole France is, I believe, highly regarded by many francophiles. Personally I find his writing perhaps a little bit shallow?

Nevertheless his essays as presentet here (I already own a copy of this volume, though a poor specimen) are well worth consulting for the most part. Here are some of the chapters:

That’s it for today. But today also has startet a new dutch book-sale in the HeiligGeist Church House in downtown Copenhagen. Today the price is 60 Kr ($9,-), but soon the price will be attractive enough for me to report a bit from there and the likewise friendly Forum booksellers.